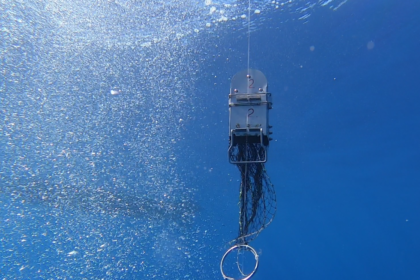 Based on the previous device trials (PARADEP 3.1) which took place in December 2020, the requested changes were applied to the case. As a result, a new design for the carabiner was tested: it is now a circular snap hook, instead of the previous rectangular one. However, the general design of the case has not evolved. The main change involved the material used to conceive the protection net (which will be designed as a cast net*). We chose a high density polyethylene (HDPE) net, with a 16mm mesh size. Stainless steel wire segments were added to the nets in order to improve their deployment skills. The protective cast net was designed as two rectangular nets. During the trials, two net sizes were tested: 100cm*80cm and 100cm*60cm.

Due to the COVID sanitary restrictions preventing us to carry out at-sea experiments in France, the PARADEP trials were conducted in March 2021 in La Réunion Island. Those trials were performed by Marc Soria, the acoustical engineer involved in the project, Nicolas Guillon (NEXA-CITEB, http://www.nexa.re/accueil/) and the diving club Dodo Palmé (https://dodopalme.fr/). The experiments took place during 4 half-days. The same previous experimental protocol was applied: 3 divers recorded the underwater behavior of the devices, from their triggering to the net deployment around the fish. Tests of untimely triggering of the device during simulated line setting and hauling were also carried out.

The first results indicate that the case and the carabiner still need some improvements before being fully operational. Besides, the net material is too rigid and did not deploy as expected. Therefore, we are still looking for the most adequate material. The complete analysis of the recorded footages can be accessed in this report (in french).

A short movie of the device deployement can be seen below:

We thank the Dodo Palmé diving club, Marc Soria and Nicolas Guillon for their active participation to those trials.

* Here is an example of the cast net fishing technique, upon which the protection net design is based: https://youtu.be/a1jueU4wJMo . In our case, the net slides down the branchline and covers the fish.